One of the First Signs of Spring

I don't know about you but my nav station collects stuff. By season's end, the inside contains little bits and pieces of things that have long ago been replaced, fixed, or otherwise rendered unto Neptune. It seems that the natural place to put things that you don't know what to do with is the nav station surface. So much so that before you can go for the first sail of the season something must be done or face charts, bulbs, little bits of wire, tape, Eldridge's (last year's), the screwdriver you use when you're too lazy to find a proper tool and whatever else hides in the corners ends up on the cabin sole or in the bilge.

So last weekend while installing my radio/CD player I had to clean it up. The first thing I found is that I have a bunch more spare parts than I knew. The other thing is that there's lots of room there for, well, navigating. Who knew? So, for the first few weeks of this season I'll have a ship-shape nav station while it waits to accrete this year's detritus.

My point here is that it's another spring and the beginning of a new season. There was a lull in work on the boat because it was cold and dark and unfriendly and frankly, all I really wanted to do aboard was sleep. I felt bad because I hadn't gotten anything done.

But in the last few weeks I've installed the new VHF with DSC calling and locating, new self-tailing winches (purchased as a celebration of a new job), and the stereo mentioned before. I'll finish up the holding tank plumbing now and will be setting sail late April for the season's first cruise. I can't wait!

Because of travel plans, I won't get the cover off until April 20 or so. But then, watch out! The weather keeps getting nicer and nicer. I sure do hope work doesn't get in the way of fun this year!

So, installing winches. Here goes. It is my feeling that you can't have enough of the things. Moreover, the standard placement of the winches Pelican meant that you have to go into autopilot to adjust the sails. This is a terrible way to singlehand, especially if the autopilot fails. I know since I've done it. 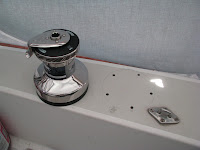 I recently came into a little bit of money and purchased two Andersen 46STs to use as primaries near the wheel (which I replaced with a 48" wheel). The first thing to consider is the actual placement. In Pelican's case, the mizzen stays and main backstays are right where you'd put a winch in a perfect world. Since it's not, I took a winch out of the box and put a winch handle in it and placed it where I could spin the handle without hitting my hand or anything else. I placed them outboard as far as I could on the coaming. I marked the circle where the base would be. 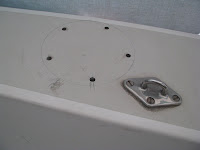 Next, I looked under the coaming to see if there was anything I wouldn't like to drill into, like electrical or fuel lines. This is a sometimes overlooked step that results in all sorts of grief. I've said it before: Good judgment comes from experience; experience from bad judgment.

Anyway, the winches come with a template, but since you have to take the top off to mount them, I just took it off, lined up the base with the circle I drew earlier, and with a marker marked the five mounting holes. 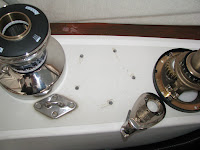 Since the mounting bolts are 5/16" I drilled all the holes to 7/16", taped the bottom and filled with liquid epoxy. After that set (well, a little longer because the neighbor came over and offered some wine so that pretty well finished that day's work) , I re-drilled the holes to 5/16". 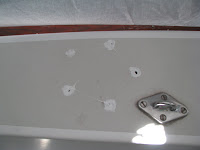 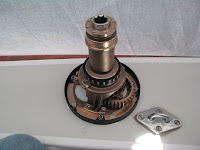 Next I put 3M 4200UV around each hole and put the winches in place. With the help of my aforementioned wine producing neighbor, I crawled in the locker and he held the bolt head while I cranked from below. 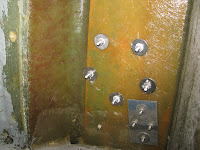 Now as you see the picture from below, you'll notice I used fender washers instead of a full backing plate. When drilling through the coaming, I noticed the core was solid mahogany rather than plywood. It was 3/4" thick, as well. Since winch loading is sideways and not straight up I'm not worried. The original winches had no more than a regular washer and a lock washer and they've stood up for 30 years. 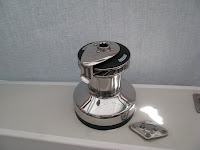 Because of the stays, I'll have to put a turning block on the port side to clear all the interference and to avoid the forward winches. I'll do this when the cover comes off later this month.