A Rendezvous and Various Adventures 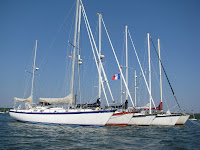 There is a Pearson 424 owner's organization - Of course I belong to it - that has such a tremendous wealth of information and opinion from people who have sailed the 424 all over the world. All of us have had similarly different experiences (that's not double-speak - your right hand is like your left hand only different, if you get my drift) and have come up with some pretty spectacular solutions.

For this trip Paul and Jo from Canada who are new 424 owners came along. They're really nice people and it was an extraordinary pleasure to have them along. Both are experienced sailors and this will be telling a little later on.

The really neat thing about all this is that even though the solutions are different, they're all quite valid and totally satisfactory. It is in these solutions the owner's personality become apparent. There really is, it seems, more than one way to skin a cat. 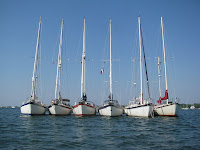 This weekend (July 26-27 2008) was a rendezvous for the 424 owners. Rodd and Thatcher who keep their boats there suggested Three Mile Harbor, NY (just west of Montauk, the end of the South Fork of Long Island). The harbor is quite large with a mud bottom. More on that later. Six of us showed up and we rafted together.

There are several things I learned this weekend. First, how to kedge an anchor. Second, a Fortress anchor is worth its weight in gold (big surprise to me). Third, you can move a raft-up en masse with the help of hand held radios. Fourth, my outboard motor works like a champ and drives the 10.5 foot Achilles dinghy really well. Fifth, boats that are the same aren't. 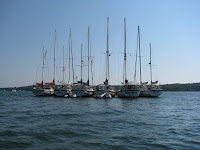 Remember the mud? Well as you put more boats on a raft-up, you need more anchors. We started with two and as Saturday wore on we had two or three more boats arrive. As the anchors were mostly on the other side of the raft up, I volunteered to set one of mine. Since my main anchors are a 45 lb CQR and a 70 lb Bruce I wasn't interested in taking one of them out in the dinghy. I happen to have a Fortress 23 and that seemed a good choice as it only weighs about, well, 23 lbs.

First, if you're going to kedge by yourself (there were others there, but this was an excellent opportunity to try on my own because there were others there) and even if you've got help, first flake the anchor rode out - I flaked the chain on one side of the deck and the nylon rode on the other. Figure out how much you might need and add a few more feet. Make sure the lines are not overrunning each other. This sounds obvious, but a knot in the rode will make your life very difficult. Put the anchor where you can reach it safely from the dinghy. Obviously, a 23 lb anchor is pretty easy to carry, for me, anyway.

Bring the dinghy to the anchor and put the anchor gently into the bottom so that you don't puncture the dinghy. Holing the dinghy is considered bad form. I found using reverse so I could watch the rode paying out to be the best way. It may be difficult running astern if there are big seas, so be prepared to go forward and watch you don't tangle the rode with the engine. Once far enough out (you decide), drop the anchor and chain part of the rode like you'd normally do it from the bow, drifting back towards the boat as you do.

Once the anchor is down, go back to the boat and pull the rode in to set the anchor. It turns out that the Fortress/Danforth type of anchor sets pretty easily in mud. The plow type anchors don't. Bruces do.

Anyway, after that little drill, the wind came up and we started to drift. The two plow anchors skipped along the bottom and finally my Fortress really dug in. We had 150,000lbs + of boat holding on my anchor in 15kts wind!

My brilliant idea was to start the engines of the two outboard boats on the raft-up and idle or whatever to a new anchor point and drop all three major anchors (I decided to use the Bruce), drift back to set them and call it a day. So that's what we did using hand held radios to coordinate the port and starboard boats for directional control. I'm sure it was quite a sight to see the six boats motoring about the harbor all tied together. I wouldn't recommend this for rough water. Of course, if it were rough, we wouldn't raft up.

I have never used the motor on my dinghy. Moreover, I've never actually used the dinghy for anything but washing the boat in the water. If you want an inflatable dinghy and you don't want a RIB, then make sure that the dinghy you get has an inflatable floor and keel. Highly recommended because it makes the dinghy more maneuverable and it tows much better than the flat bottom ones. Oh, and it can plane.

My 8hp Nissan 2 cycle outboard is more than sufficient for my dinghy and now that I figured out how to get it into the dinghy without undue strain and gnashing of teeth, I'll use it more. Knowing I was going to have to use it, I made an engine harness for it. I use the mizzen boom an mizzen sheet as a lifting device to lower it over the side to the dinghy's transom. Very easy. No drama. Works like a champ. The same in reverse to remove.

I really got a lot of experience on things you'd never normally have to do and that made the weekend worthwhile even if the people hadn't been absolutely spectacular!

On the way back we rounded Orient Point into a serious thunderstorm - winds gusting to 38 kts steady at 30-35. Well, sir, we were puttering along before this with the jib, staysail, and mizzen and when the wind went to 25 kts or so we rolled in half the jib. Then as it built, we rolled it all the way in. Call me chicken, but at that point I had the engine running at an idle. The lee shore wasn't so far away. Anyway, the staysail and the mizzen powered us through at 7+ kts (hitting 8+ at times) on a close reach and there was no drama! The boat was heeled about 10-15 degrees and that was that. Easy to steer and easy to deal with. I was pleasantly surprised and really thankful that Paul and Jo were there.

Now I know what the boat can take and I know what I have to do to keep all the stuff where it belongs in a seaway. It turns out that the normal elbow catches don't do the job. If there's any weight at all behind the door/drawer the catches will let go. Moreover, I think that the catches where you have to put your finger inside a hole to unlatch is pretty much asking for a broken finger at some time. So the search is on for a solution - external, positive, easy to use. I don't really want to use barrel bolts because too much fancy stuff has to be done to make it work, like blocking the barrel up to the height of the drawer face. But as a last resort, I'll do it. 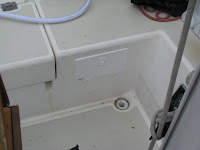 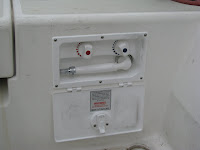 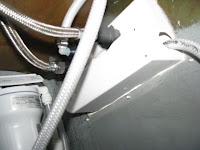 Recently I added a cockpit shower. Here are the pictures of the external and internal set up. I picked the place to put it because that's where the dockside water fitting is and there's little or no structural stress and it's easy to work behind that face of the cockpit. I chose the fitting because it has a sealing door. One thing I don't like that much is that where the hose goes in is a potential leakage point when using the shower, but I left the hose long enough that I can be pretty far away when using it. You'd not use it in a stormy seaway anyhow.

There's nothing better than a cockpit shower for keeping salt out of the boat. A very worthwhile project and it took me about 2 hours to install. True, I've done it before, but still, it's a really easy project.