There Is Never Enough Space!

I'm going out on a limb here and stating a truism: There is never enough stowage in a boat. No matter how much space you think you have, you'll fill it and want more (I think it's the reason people purchase bigger boats - they can have more stuff aboard).

In Pelican, there are three usable cabin sole openings. The forward one in the v-berth cabin is large enough to stow some wine and get to the knot meter for maintenance. There's one in the main cabin just above the keel and deeper area where I've put the holding tank and a third that gives access to the Walter V-Drive. 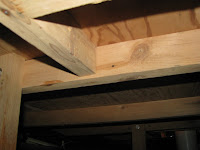 However, sticking my head in the opening in the main cabin I can see there is enough volume below the cabin sole to store, literally, tons of stuff. But it's not accessible. The main space aft of the mast on top of the keel is 18" tall, 20" wide or so, and 5 feet long - to either side are stowage areas following the hull, going the whole length of the cabin, way up into the v-berth. But sadly, no access. 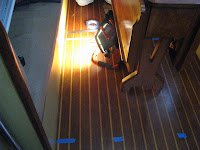 Well, that's changing. I wanted better access to those volumes and to upgrade the latches on the floorboards so that they meet the Saftey Of Life At 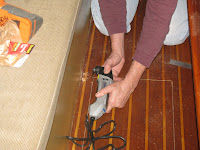 Sea (SOLAS) specifications. So, with help from my good friend Leigh we set about cutting the openings out from the cabin sole. One great tool we used is a new one from Dremel - called the Multi-max. It vibrates and you can get a small saw blade that allows you to cut the corners square. The basic kit comes with one. 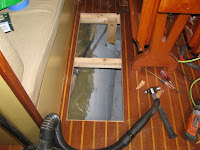 After cutting out the openings, we cleaned up the edges and framed out the openings with 2x3 Douglas fir. That's the same type of wood used by Pearson to frame out the cabin. Since it's really very dry there, fir is perfectly fine. If it were wet all the time, I'd probably use oak or even better, ipe, a really hard, dense wood that is supposed to be a sustainable wood. It's very hard to work with, so think twice before starting a big project. But it will last forever in almost all environments. 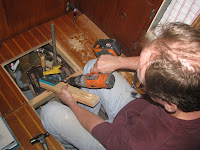 Anyway, once the things were framed out, Leigh took the cut out sole board 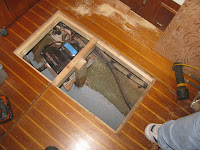 home and framed them in oak - which is what Pearson did. They didn't use teak.

When I got them back, I took the time to fit them properly. Leigh had made them exactly the same size as the hole so I just removed 1/32" on each side with an electric plane and hey! Presto! Perfect fit. 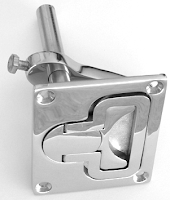 Now, for me, comes the hard part. I'm great with plumbing, electrics, electronics, welding, machining with all sorts of materials. But put a piece of wood in front of me and you can be sure it will end up as toothpicks or scrap. That's just the way it is. Wood and I just don't get along.

As it turns out, Leigh, sometime in the past, had made patterns for mortising the latches - we had used them to lock down floorboards on some boats participating in the Newport-Bermuda race. SOLAS, as I mentioned, requires all openings have positive latches and these are the strongest and easiest to use. Anyway, there are two patterns; one for the square opening you see at the sole level and the other for the mechanism below. In addition, I have to drill a hole below that for the rod to stick out from. The latches are available at Marine Parts Depot (see link on sidebar) at half the price anywhere else and unlike the ABI ones (very expensive) these have stainless steel bolts - The ABI ones have or had bronze or brass ones which were too easy to snap. 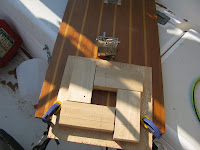 This is the first pattern - the fitting must start at least 2" from the edge of the board so I've marked the pattern at 2" from the inside edge of the opening. I can line it up and center it and then clamp it. Using a router and a 1/2" pattern bit slowly adjust it until the depth is correct - the cut in the wood is about 3/32" but I took the time to compare it to the fitting's thickness so it would lay flush. You'll notice that the pattern has boards on it - there's a reason for that and once the bit is cutting to the proper depth, merely changing the pattern will make the depth cut for the mechanism perfect. 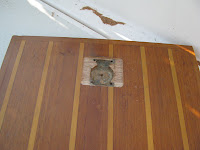 You'll notice on this board there is an old mortise - this is from the pull ring. Fortunately, the pull ring hardware fits exactly within the footprint of the new latch and is exactly in the right place. Remember, the latch you purchase will have a rather large variability for the distance from the edge so if you need to move it one way or the other you can shorten the arm or make the latch on the frame wider - there is really about an inch of play. Finally, I squared the corners with a sharp 1/2" wood chisel. Take your time and do this right and it will make installation look totally professional. 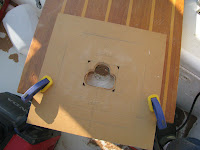 The second pattern is lined up with the first pattern's corners - notice the little triangles cut out at the corners of the pattern hole. These are exactly the corners of the first pattern and allow you to look down and see the mortise that exists. The inner hole, the one you'll route out, is not aligned on any edge - it actually is short of the edge enough so that the screws in the latch will bite wood. This is very important. 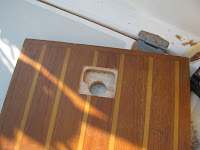 You can see the whole mortise now with the 1-1/2" hole drilled for the mechanism and shaft. This bit of routing creates lots and lots of sawdust. Don't do it in the boat. Really, you'll be cleaning up sawdust for years. Just cutting the openings took me almost a week to get all the nooks and crannies clean. What a mess!

My friend Bob Muldoon made me some aluminum angle fittings for the latches to lock to - they are simply 3" long sections of 90 degree angle with three holes drilled in one arm for attaching to the frame below the sole. Dead simple. I installed them so that they were even with the top of the frame and the sole would sit just on top of them. Then I adjusted the arm on the latch to be just next to the arm of the angle that protrudes into the opening.

There are many ways to hold down the sole openings - on other boats, I used pins on one side that slid into sockets and only one latch on the opposite side. On Pelican, I used two latches because it's just easier and there is less likelyhood for splitting the cabin sole where they go. For the price of the latches, it just made sense - it also gives me two handholds for the piece. 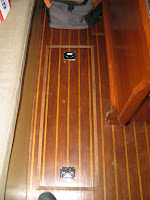 So, then, here is an example of a finished sole opening. This particular one on the port side will allow access to one end of the watermaker - just aft of where you see the toe of my foot is another new access panel that gives me access to the refrigerator compressor and where the actual water maker pump and plumbing will be.

As I write this it's snowing the first real snowstorm of the season. It's hard to imagine that! Ok, not hard - all I have to do is go outside. But here in Pelican I'm warm and toasty. There are a tremendous number of winter projects and I'm excited about each one!

All to soon this downtime will be over and it will be sailing season again! I can't wait for that either! If I don't see you on the docks, I'll see you on the water in spring! Happy Holidays! Happy and healthy and good boating New Year!
Posted by Cap't Bob at 11:18 AM

Great post. I am planning to do the same thing on Deep Playa!