It's mid July and the season here in the northeast, especially around Long Island Sound has been rather crappy - mostly rain and cool. Still, I've been working on Pelican - two current projects are installing the water maker and replacing the lifelines. 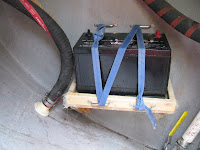 There are other projects that got done on the sly, as it were, where I just needed to get them done. One was replacing the emergency start battery and adding one to that bank - the original was a group 31 flooded cell battery that got cooked as all my systems are set for AGM batteries. I figured if one was good, two would be better and then realized that two wouldn't fit in the volume I wanted them in. So I made a shelf in one of the lazerettes and mounted one there. 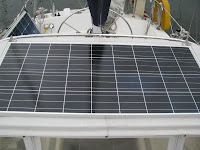 Another project that just needed to get done was a new solar panel - no big deal but I replaced what I think was an old 80 watt panel with a 130 watt Kyocera panel and the difference was appreciable! In good sunlight the panel alone supplys 70% of the power required for the autopilot, instruments, and refrigerator. Not bad. And the panel is smaller than the old panel. Moreover, solar panels are as inexpensive as they're going to be for a while.

In getting a boat ready for offshore use there are safety issues that must be addressed. A great source of information is the International Convention for the Safety Of Life At Sea (SOLAS). In addition to many other pieces of maritime safety information, they have a checklist for getting a small yacht ready to go offshore. The checklist is provided to anyone preparing for a Marion or Newport to Bermuda race, and inspected for and enforced. It's no joke, and luck favors the prepared.

In any case, many of the items are good seamanship and common sense - all openings should be latched to prevent opening in a knockdown or rollover, for instance. You could look at the post on the new floorboard openings if you like to see how that's done.

Another issue that's important and often overlooked is lifelines. Most lifelines are vinyl covered stainless steel with swaged fittings. This is fine for new boats or boats that are not likely to see severe weather (most in marinas fit that description, sadly). But the SOLAS standard is bare stainless steel so that if there is corrosion at the ends or the middle it's obvious and repaired before someone falls through it, in theory. 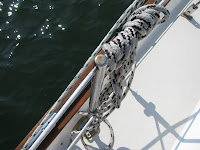 Anyway, my lifelines were coated and there was apparent rust at the terminal ends so I thought I'd replace them. I have access to swaging machines and terminals and so forth, but I saw that Suncor Stainless makes SOLAS approved lifeline kits that are installable with simple tools. "Hey!" I thought, "That's for me!" 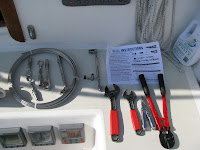 The kits come in four flavors - with and without gates and with or without coating on the wire. I chose 4 bare wire with gates kits. From West Marine with a Port Supply discount, they were $215 each. Pound for pound, they're about $30-$50 more expensive than having to purchase the fittings and doing it yourself. Still, they are several hundred dollars less than having a rigger do the job. Pictured at the left are the tools you need - I purchased the wire cutter since I needed it anyway as an emergency tool.
One item not shown is LocTite thread sealant. You need a little tube of it and I used the medium strength stuff 'cause you never know... 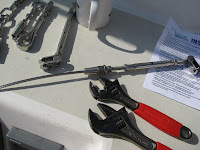 There's a specific order you put the lifelines together in - from the bow to the gate, from the stern to the gate, and then the gate. Before starting, however, make sure your stanchions are aligned properly, straight up and down, and if there are adjustable supports, make sure they're well attached. It will make your life easier in the long run. In the picture at the left I've installed the turnbuckle for the bow on the new spool of wire. The instructions are short but complete inasmuch as there are really only three moving parts, the collar, the wedges (three held by an o-ring) and a bronze washer. The only vague part is how tight to make it. They say in the instructions tight but not too tight. That will differ from person to person, I think. 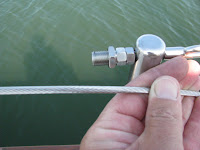 Note: This is important! Whenever a piece has adjustment, put it half-way before measuring and cutting the wire! Open turnbuckles 1/2 way. Unscrew pelican hooks halfway.

Anyway, the gate eyes screw onto studs and have lock nuts behind them, so I just installed the one end in the stanchion, took the left over piece of cable and mounted the pelican hook, hooked the hook and measured to the back end of the gate as you see to the left. I cut the wire and assembled the whole thing. The eyes are put on with the LocTite. That's the only place I used it. 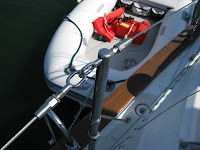 Here's the gate eye completed. The first lifeline took me about an hour to install. The other three went in in about two hours. As it turns out, I didn't know the pelican hook was adjustable so I didn't unscrew it when I made my cable and it turned out too long - not a lot too long, but enough to droop and not give a great sense of security. After calling Suncor I found that you can reuse the fitting if you haven't damaged it by over-tightening. Otherwise, you need new wedges and bronze rings. No big deal.

Each set comes with 40' of cable. That should be good up to a 48-50' boat as I have about 6' left over from each line. The Suncor people are easy to deal with and are knowledgable and friendly. Highly recommended.

As I mentioned, the 100 day mark is here - so I'll be working tirelessly between sailing and partying to get the boat ready. The major safety equipment is in, with the life raft being the most recent expense - with recertification and a hydrostatic release, it's $1300...

Things are coming a long nicely!